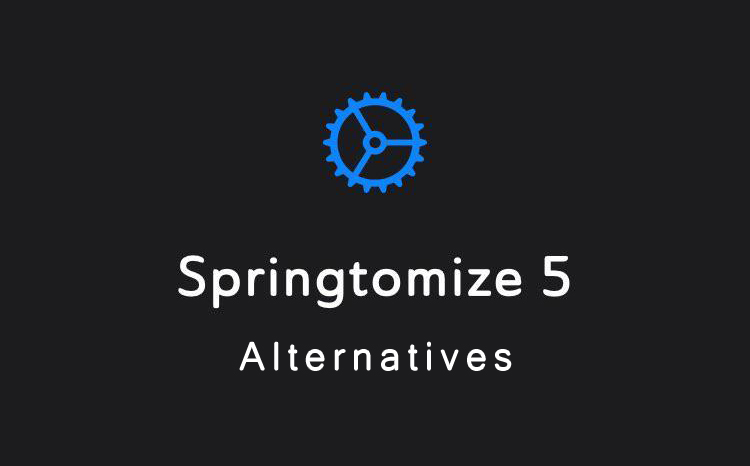 Springtomize is one of the most popular iOS customization jailbreak tweaks ever conceived in the history of jailbreak. So, it has been maintained every year to be compliant with the latest iOS versions of Apple. It gives you all the features to customize your jailbroken device in one place like never before. In other words, it allows you to customize your iOS device the way you like it. Springtomize 5 is the newest update to Springtomize that supports customizing the latest iOS 14. Unfortunately, Springtomize 5 is not free. Therefore, I have seen some jailbreakers ask from the jailbreak community like r/jailbreak; are there any free Springtomize 5 alternatives for iOS 14?

So in this article, I hope to share the free and paid alternatives for Springtomize 5 that works with iOS 14.

As mentioned above, we know that Springtomize 5 is a premium tweak that customizes the iOS operating system to your liking. Therefore, a tweak has not yet been released, providing all the customization features of Springtomize 5 for free. But, Jailbreak developers have developed similar free tweaks.

iOS developer FissionDev has released a free tweak called Uranium that allows jailbreakers to customize your iOS 14’s Springboard. However, it allows you to enable or disable many main features in iOS 14, like App Library, Home bar, Quick Action Buttons on the Lock Screen, Control Center Grabber, App Labels on Home Screen, and more.

You can learn more about Uranium and how it works in our full review.

Are you looking for a quick and easy way to personalize various iOS user interface parts for free? WaveAway is a newly released and free Jailbreak tweak by iOS developer Sangster.

Especially, WaveAway is an all-in-one free tweak that lets you customize your iPhone’s operating system. But, as it does not offer as much specialization as Springtomize 5, it is worth checking out as a free release.

You can learn more about WaveAway tweak and how it works in our full review.

Cylinder Reborn is a barrel-inspired original screen paging animation tweak by iOS developers Ryan Nair and Reed Weichler. The tweak is one of the best alternatives for Springtomize 5 for iOS 14.

Once installed, More than five dozen animations are available from Cylinder Reborn, allowing users to select more than one animation to randomly animate as they go left and right across the Home Screen. Moreover, you can save your setups individually through the latest feature called Formulas.

You can learn more about Cylinder Reborn tweak and how it works in our full review.

Five Icon Dock is a free simple tweak by iOS developer Minazuki_dev that allows you to set the number of Dock icons to 5 on iOS 14, and jailbreak begins with the remodeling of SpringBoard.

Once installed, primarily, it does not provide any options to configure. So, you can drag and drop app icons to the Dock in iOS 14. Five Icon Dock is one of the customization features in Springtomize 5.

As mentioned above, a few paid Springtomize 5 alternatives for iOS 14, and they are all-in-one tweaks with features similar to Springtomize 5. With these ultimate customization tweaks for iOS 14, you can customize your iOS devices like never before. Moreover, these tweaks give you a massive range of options in categories. Let’s jump in to see what those tweaks look like.

Lynx 2 is an ultimate iOS device customization tweak for iOS 14 by iOS developer MTAC. However, we can consider Lynx 2 as one of the best alternatives for Springtomize 5. It offers excellent features under various categories to different customization locations in iOS 14.

Once installed, it adds a preferences window to the settings app where you can change all your liking features.

Genesis 2 is also an ultimate iOS device customization tweak for iOS 14 by iOS developer ItzNebbs like Lynx 2. It is one of the best Springtomize 5 alternatives. Like Lynx 2, and Springtomize 5, it offers excellent features under various categories to customize your iOS 14. Furthermore, Genesis 2 is compatible with both iOS and iPadOS 13-14 devices.

Genesis 2 adds a large variety of ways to customize your device and enhance the jailbreak experience. ItzNebbs has developed it for people who are tired of waiting for Apple to give us absolute freedom on our devices.

Once installed, it also adds a preferences window to the settings app where you can change all your liking features.

Springtomize is an all-in-one iOS customization tweak that most jailbreakers often remember. Recently, we can see many competitors have developed various Springtomize alternatives with lower prices than Springtomize 5. So, the latest tweak update for iOS 14 is the Merriam tweak, developed by iOS developer Kanns103.

As you can see, the Merriam tweak includes a lot of iOS customization options. However, it isn’t easy to describe all the features. With that in mind, we pay close attention to outlining all the features that we can easily understand.

Once installed, Merriam adds a dedicated preference window to the Settings app where you can configure your liking.

Here are the main features,

Apart from the above features, several new options have been introduced with the Merriam Tweak for iOS 14’s update.

Those interested in trying the Merriam tweak can purchase it for $0.99 from the Packix repository. The tweak supports jailbroken iOS 12 to 14.3 jailbroken devices.

So, what do you think of Springtomize 5 alternatives for iOS 14? And if there are other alternatives you know, please share them in the comment section below.