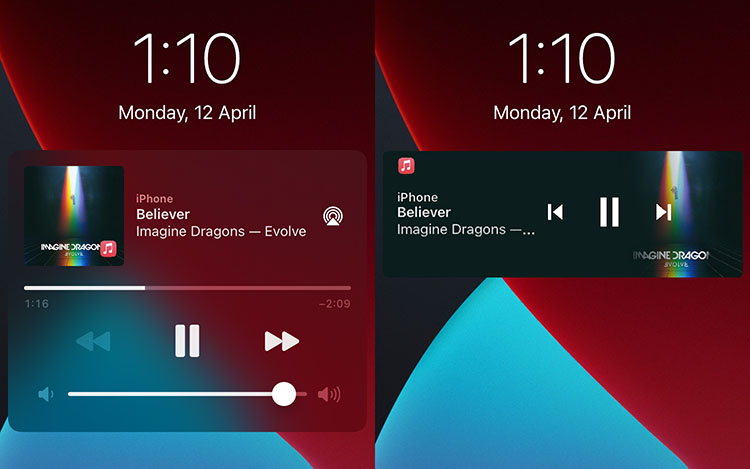 Anyone who listens to music on the iPhone knows what the iOS Now playing widget looks like. Apple has maintained the iOS Now Playing widget, which has both a lock screen and a notification center interface, with the same look, with minor, aesthetic changes over the years. Those looking for a new aesthetic for Now Playing may not find it in an iOS update provided by Apple. As a solution, a new jailbreak tweak called Gradi by iOS developer Ginsu provides users a YouTube Music / Google Music-inspired Now Playing widget interface, that replaces iOS’ native Now Playing interface.

You can see the Now Playing interface in the screenshot above as before and after the Gradi tweak.

In particular, the Gradi widget gives a smaller interface than the native Now playing interface. Furthermore, the widget’s left side shows the album’s details with the media controls. The right side of the interface shows a blur effect for the album artwork that plays any song. In other words, the tweak brings Google’s beautiful music player with the gradient to the iOS lock screen.

The Gradi Widget interface is smaller than the native interface, and there is more space for incoming notification banners and other helpful information that the user might want to see. After installation, the tweak adds a preference window to the settings app, allowing users to enable or disable on-demand; apart from that, no significant other options configure.

If you would like to experience the new Gradi tweak, you can purchase it from the Packix repository for $ 1.50. It is compatible with iOS 14.2 and later jailbroken devices. But it also works on earlier versions of iOS 14.

Do you like the look of Gradi better than the native Now Playing widget on iOS 14? Let us know what you think about it in the comment section below.

How To Change iPhone Hotspot Name in iOS 14