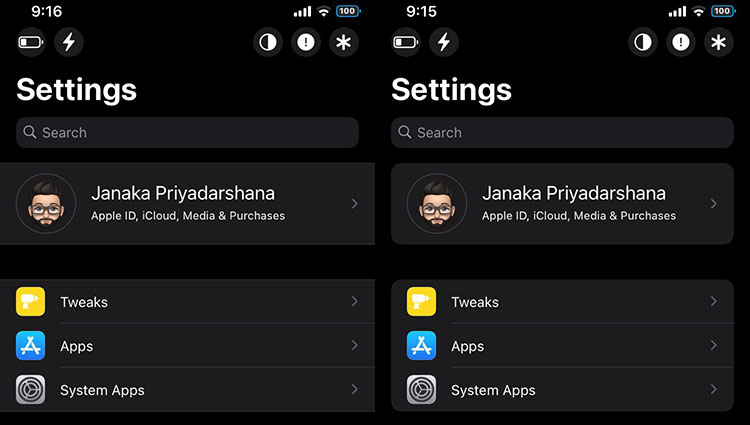 ModernStyleSettings tweak lets you get the iOS 15 style Settings app for your jailbroken iPhone running iOS 14.

You know that Apple hasn’t changed the settings app in years. But with the release of the iOS 15 developer beta, they seem to have changed the traditional settings interface. In other words, with iOS 15, Apple has given a design update to the settings app. The new look makes the settings app look more compact without touching both sides of the screen. However, the new cells are rounded, which gives them a more modern look.

If you like the new look of the iOS 15’s settings app and want to get it for your iPhone running iOS 14, ModernStyleSettings is a tweak by iOS developer Netskao. This Jailbreak tweak brings the iOS 15 style settings app to iOS 14 and older iOS versions.

After installing Tweak, the cells become more compact, and you can see in the before (left) and after (right) from the screenshots below that they are the same as in iOS 15 Beta. Also, it does not add any options to the settings app to configure it.

The new-look includes all parts of the settings app, including the main settings page and internal pages. It is also compatible with iOS 11 to iOS 14 jailbroken devices.

Do you intend to change your settings app to iOS 15 style with ModernStyleSettings tweak? Be sure to share your thoughts in the comments section below.

How to disable paging on SpringBoard in iOS 14 with Flowing

How to disable paging on SpringBoard in iOS 14 with Flowing