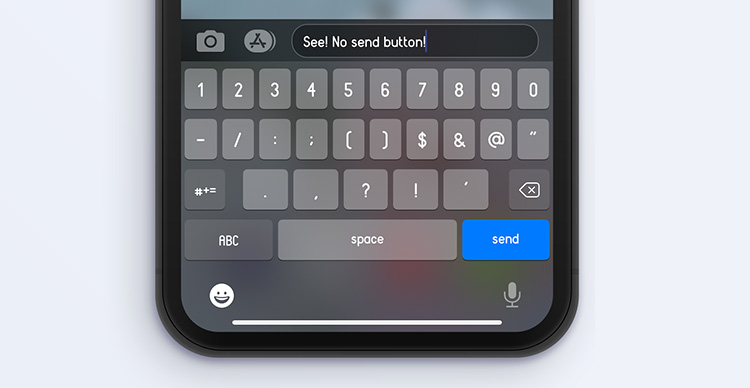 In other words, you can see that the Send button is positioned on the Snapchat keyboard itself. But, the iMessage or SMS app display the Return key instead of the Send button. While this may not seem like a significant difference, someone who is more familiar with Snapchat prefers a keyboard interface that displays the send button in both apps in the same place.

IOS developer HallieHax has released a new and free jailbreak tweak called Snapify that shifts the Send button from the message text field to the keyboard when you compose messages via iMessage or SMS in both apps.

In the screenshot above, you can see how Snapify looks like in the iOS native Quick reply interface, and the screenshot belove shows how the tweak looks in the message application itself.

Snapify is a simple tweak, and if you are already familiar with Apple’s messaging app, you will not need it. But, if you’re a big user of Snapchat and used to the messaging experience in your Snapchat app, it’s useful for you.

After installation, Snapify adds a simple preferences window to the Settings app, where you can enable or disable it. Moreover, you can allow both the native send button and the send button on the keyboard, such as Snapchat.

Those who want to try out the new Snapify tweak can download it for free from the Packix repository. This tweak supports iOS 13 and iOS 14 devices. Also, it is open-source on the developer’s GitHub page.

Would you like to replace the send button instead of the return on the iOS messaging app with the Snapify? So, leave your comment in the comment section below.

How to disable Control Center on iPhone with ShyCC

How to disable Control Center on iPhone with ShyCC